Each year, new and intriguing venues are carefully selected up and down the United Kingdom, with a long-term intention
to bring the show and the brands to every corner of the country. Venues are chosen for their beauty, interesting history, gardens and ambience, as well as their geographical location. The objective is to provide you with an enjoyable and relaxing environment, as well as the opportunity to view lovely interiors products and services in a sympathetic setting.
14th May - Hylands House, Essex
15th May - The Sculpture Gallery, Woburn, Bedfordshire
16th May - Stoneleigh Abbey, Warwickshire
21st May - Painshill, Surrey
22nd May - Leigh Court, Bristol

We had a good write-up in report issued by the Fashion Group International about Spring Summer 2019 by Bridie Collins -
Spring - Summer 2019 The Season......... Traversing New Terrotory
" Bennett Silk
Winner of Premiere Vision’s Imagination Prize for the most original fabric decorations, techniques, finishing, innovation and technology, this British mill is one of the largest suppliers of silk, selling to top designers worldwide. Many plain silk structures with basic finishes are in-stock items. The Daniel Henry collection, a collaborative effort with French textile designer Henry Portier, offers unique novelties such as bonded silk cotton with a paper touch, and a transparent printing technique that transforms the look and drape of items such as silk charmeuse. These innovations must be seen and touched to be believed! "

Interfabric Show an international exhibition of fabrics and textile materials
We have been presented with The Imaginary World Award 2017!
Daniel Henry collaboration article DH6602 transparent print Crepe Satin is now a double award winning fabric, from winning the Imagination Prize at Première Vison Paris and now Imaginary World Award at Interfabric Moscow. The article has been highly sought after as one of the best in developing fabric.
We have worldwide recognition in developing creative concepts and producing luxury fabrics that push the boundaries of textile innovation. 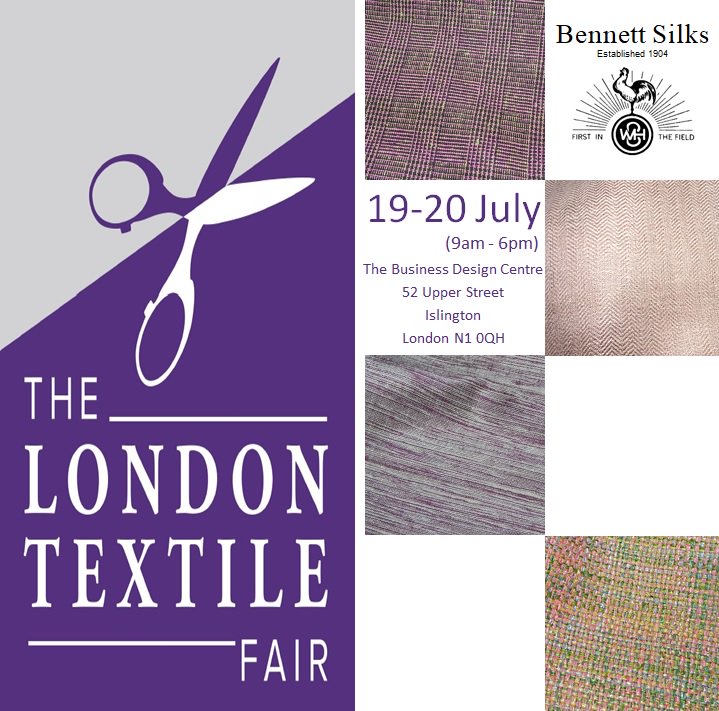 Taste of Design is a unique series of design events that sees some of the world’s finest luxury interior brands exhibiting at a selection of some of the UK’s most beautiful and iconic venues
Confirmed dates for 2017 are:
Luttrrellstown Castle, Dublin – 26th April
Titanic Museum, Belfast – 27th April

Our Pattern Books and Colour Cards are now available to order and pay for online.


We are pleased to announce that our products featured in this season's
New York fashion week and also Paris fashion week,
courtesy of Lebanese designer Tony Ward.

Printed to order on any 5053W colour

Available to order on any habotai (article 1681W) colour


Due to the size of our range we have split the range into 4 easy to manage binders:
These new binders make it far easier to find what you are looking for.

They are available individually or as a full set.


Bennett Silks is a trade only company, therefore we cannot supply the public direct. However, to satisfy the many public enquiries we recieve, we are pleased to announce that our extensive range of silks are all available to the public at one of the best known London fabric stores:

A stock service is also available for many articles.

Trade or Retail please feel free to browse our ranges in the Borovick's.


We are pleased to announce that our new central London Interior Studio is now officially open.

The studio will be available by appointment.

This website uses cookies to enhance your user experience, allowing you to see 'recently viewed items' and allowing you to add to the enquiry basket. By closing this pop up you accept our privacy policy, which can be reviewed here.